A person’s accent is the product of where they are from and, in some cases, their social and educational background.

For example, someone from Australia will most probably speak with an Australian accent, but in Australia there are also different accents because of differences in social background and education.

This is generally the case for everybody, in any part of the world. Even within a country or region, accents can be different.

For example, the different local accents that are found in London. One identifiable accent there is called Estuary English, as it’s mostly spoken in the areas near the River Thames and its estuary. This accent has some features of various different London accents, including the cockney accent typical in the East End of London.

There are, of course, standard types of accents; accents that are not associated with a particular region. An example of this is Standard English, also known as Received Pronunciation (RP), an accent not associated with a particular region, although it is related to the accents in the south of England. Received Pronunciation is considered to be a prestigious British standard accent by some; however, a very small percentage of people living in the UK actually speak with this accent.

English as a lingua franca

The fact is that, nowadays, the majority of speakers of English are non-native speakers – those who speak English as a second or third language, a lingua franca, a language used for communication between groups of people who speak different languages; for example, scientists working in a European context or the staff in an airport. So, taking this into account, the goal of having a native-speaker accent could be seen to be irrelevant.

Everybody has an accent

Everybody has an accent, although, if you think that a person doesn’t have an accent, this could be because they have the same accent as you. A person’s accent is part of their history and their identity. Different accents reflect the richness of civilisation and culture. So, when is someone’s accent an issue?

What do language learners need?

Try the following sensitising or conscious-raising exercise to see an example of how students can practise listening to different accents: 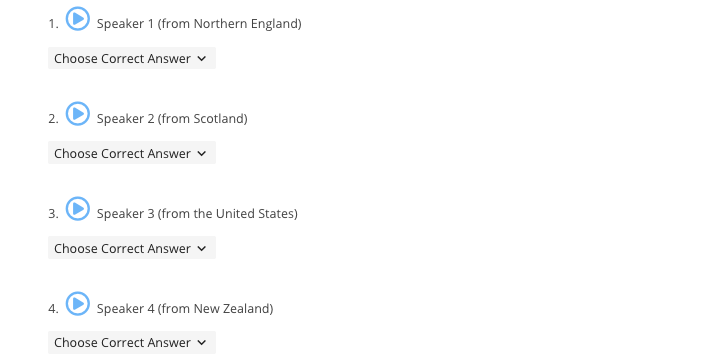 In this Pre-Advanced (B2+ Council of Europe level) exercise from the Net Languages General English course, learners are exposed to speakers with different accents, saying words and short sentences.

This is a sensitising exercise where learners can become more aware of accent differences and, as a result, cope with them better when they are encountered. An exercise like this can help to prepare learners so that they can communicate in the many and varied contexts in which they find themselves in their day-to-day lives.